Some of you may remember Robert Stewart who was an All American defensive lineman at Alabama (I believe from 1986-1991). He passed a couple of days ago at the age of 55. He was drafted by the Saints but didn’t make it in the NFL but had a 12 year career in arena football.

He played high school football at Houston County High in Columbia, Al. I remember him as the most feared football player in high school back then. He rarely played defense in high school but was a running back. He was about 6’-0” 250 and ran a 4.5 40. They would line him up at tailback about 8 yards behind the line of scrimmage and he was literally a battering ram by the time he made it to the line of scrimmage. The only way you could tackle him was to hit him at his ankle. I remember one play where 2 guys tried to tackle him high at the same time. One of the guys had a cracked sternum and the other a broken vertebrae. He was powerful. He held most of if not all of the weightlifting records at Alabama at the time and Bill Curry called him the most complete physical specimen he had ever seen. He had very little body fat.

I didn’t know him personally, but by all accounts from friends he turned out to be a great guy. He did get into some trouble in college I believe his sophomore year, but turned it around and became an all American his senior year.
Reactions: TiderJack, 4Bama, dathbama and 9 others

I had forgotten about Stewart. RIP 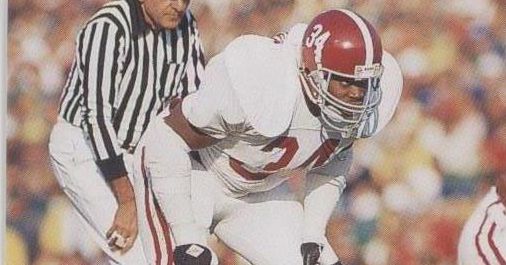 Started at running back, but ended up as a legendary nose guard in the Arena League.

seebell said:
I had forgotten about Stewart. RIP

Started at running back, but ended up as a legendary nose guard in the Arena League.

Their editor sucks at his job.
Reactions: rolltide_21 and dathbama
B

Early in this video of Bama vs. Texas 8&4, Stewart was in at fullback and caught a pass. This was the "Hurricane Bowl" makeup game after we rufused to send our team down there due to the threat of a storm. He played with Byron Holdbrooks back from my old high school days. Byron loved him and said he was one of the strongest guys that he ever played with at UA. RIP to Robert, Byron, and DT. All gone way too soon.

Great Tide player, RIP Robert, you will not be forgotten.
Reactions: Go Bama

So sorry to hear of this. He was still young. RIP
Reactions: NationalTitles18 and GrayTide

I lived in Headland at the time...he was "the man" in HS. A friend of mine bought a lot of firewood from his father to encourage him to go to UA....
Reactions: dathbama
B

He was one of my favorites back then. RIP big guy!
B

Dang he was a good one. Close to my family in Ashford.

While at UA, I shared an elevator ride at Rose Towers with Stewart once. Just us two, and I thought that no one else would be able to squeeze in there. I'm taller than he was, but I think he was as big around as about four of me. Seemed like a nice dude. RIP
A

Padreruf said:
I lived in Headland at the time...he was "the man" in HS. A friend of mine bought a lot of firewood from his father to encourage him to go to UA....
Click to expand...

I went to Headland when Robert was at HCHS
Reactions: Padreruf

I remember him well. He moved so well for his size...
Reactions: TiderJack

TIDE-HSV said:
I remember him well. He moved so well for his size...
Click to expand...

He did and was one of our strongest players during that era. RIP Robert.

This was from my undergrad days at Bama - really sad to see how many of the guys from those teams that've passed away far too young - Stewart, DT, Kevin Turner, McCants.
Reactions: Con and seebell

Praying for comfort for his family.

Hate to see this. Attended 'Bama at the same time. Actually, my high school in Blakely, Ga. played Houston County when Robert was there. The towns are only 14 miles apart.
Reactions: ATLBAMAFAN and Padreruf
W