Guido said:
I heard an interesting tidbit today, tebow is only 3 games away from being fully invested in his nfl pension. He and urban are very good friends, maybe this has a little to do with it.
Click to expand...

If that is true, good for him.
Reactions: CullmanTide, TraskiTideFan, crimsonaudio and 1 other person
G

B1GTide said:
If that is true, good for him.
Click to expand...

I heard it from chris landry, an old nfl front office guy, now does mostly consulting. Urban has made a boatload of money coaching and media, tebow was a prime factor in his success, he could be signed and placed on the IL or the PUP list and then cut later, we'll see.
Reactions: TideEngineer08 and B1GTide

I just don’t see this panning out. The only reason he was signed is because he’s Urban’s friend. The last played NFL game he played in was in 2012.

Guido said:
I heard an interesting tidbit today, tebow is only 3 games away from being fully invested in his nfl pension. He and urban are very good friends, maybe this has a little to do with it.
Click to expand...

If that's true then I'm happy for Tebow. He's a stand up guy and anybody in his shoes would want that pension for life too.

Tebow will always have a job in TV if he wants it, but I appreciate his desire to still play.

In his peak years at UF. If UF needed 3 yards a direct snap to Tebow was almost 100% successful. I hated it but admired it.
Reactions: B1GTide

I hope the pension angle is true. Urban has an uphill rebuilding job to do. The last thing he really needs is an old, smallish, inexperienced TE when he has better options already on roster...
Reactions: bamagradinATL and B1GTide

TIDE-HSV said:
I hope the pension angle is true. Urban has an uphill rebuilding job to do. The last thing he really needs is an old, smallish, inexperienced TE when he has better options already on roster...
Click to expand...

Too bad most NFL teams don't use a full back anymore. I think he could be successful there...not sure about now though. Not playing for a few years probably has taken its toil.

I'm willing to sit and see what happens. Give the guy a chance, if he succeeds...great, if not, get your popcorn ready, the finger pointing and ridiculing will be fast and furious.

Controversial’ figure Tim Tebow back where he belongs….

I think Joseph Goodman is scum of the earth for labeling Tebow as controversial. I wish more people were a lot more like Tim Tebow than what I see in media
Reactions: TiderJack and Toddrn 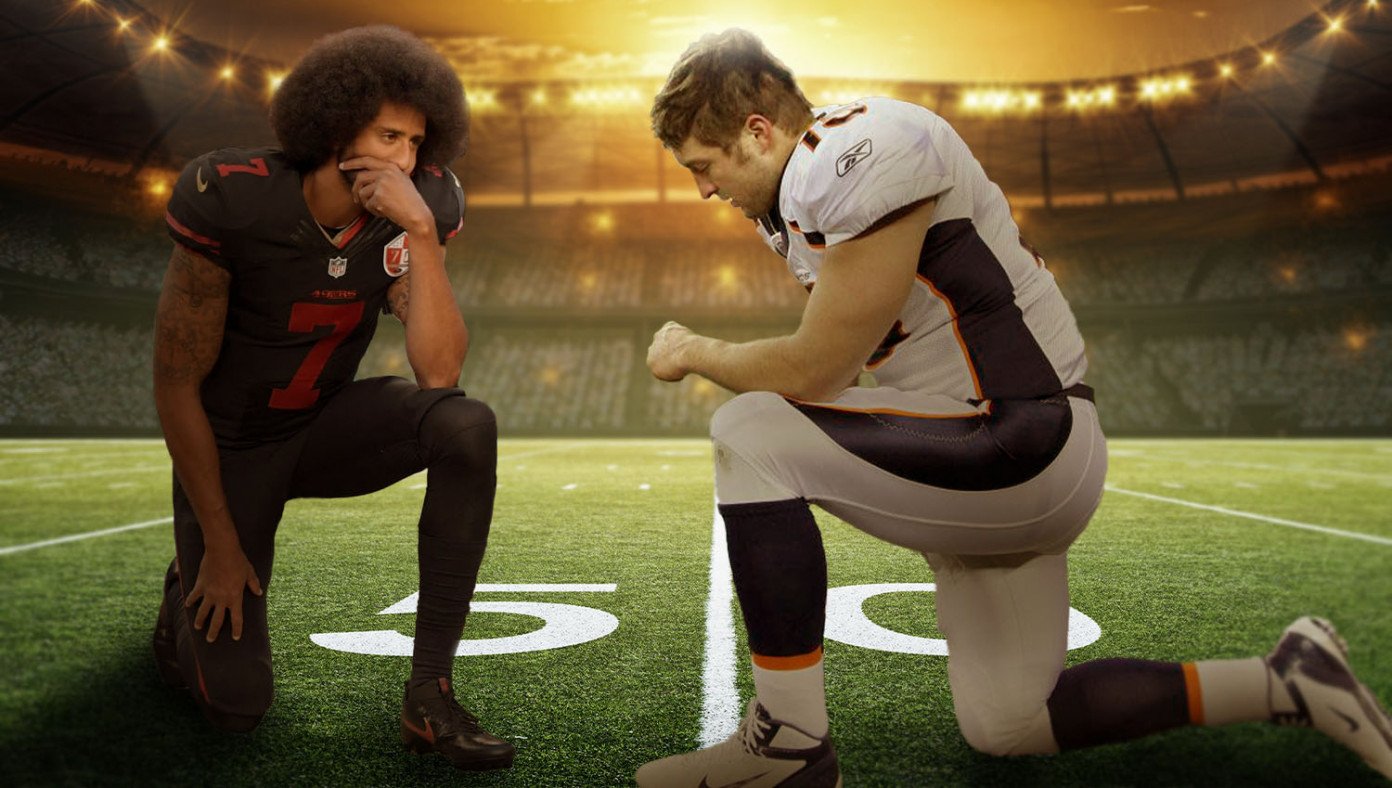 Tebow, Kaepernick To Compete In Epic Kneeling Contest For Spot On NFL Team

JACKSONVILLE, FL - The NFL has announced that Tim Tebow and Colin Kaepernick will now compete in an epic kneel-off for a spot on an NFL team. This weekend, the two legendary players will meet at the 50-yard-line of the Jacksonville Jaguars stadium to see who can kneel the longest. 'These are by...

Satire aside, I honestly don’t know which one is worse (on AND off the field).

I’m tired of both Urban and Tebow hope the Jags suck badly because it has 3 people in sports I am tired of. Lawrence is the other. But if they want to continue that is their decision. But the guy gets more chances than anyone in history. I get that some see this as inspirational, but at some point you have to question why this guy keeps getting chances when there are far far far better guys that are questioning retirement because they just got cut. The guy appears to be a good human being, but at some point we have to seriously question what is it about this particular guy that earns him chance after chance. I hope he doesn’t get hurt and Atleast walks away happy but other than that the Jags are on my “I hope they are 0-17” list, and they were on that list way before Tebow.

As for Tebow being controversial.... he is but a good part of it isn’t his fault. A good chunk of it is sports reporters that are totally for and against him. Another is his involvement with Urban Meyer.
Last edited: May 15, 2021
Reactions: CrimsonRuss, crimsonaudio and DzynKingRTR

BigPoppa52 said:
With all respect, I'm not so sure about that. Wasn't it because his proselytizing caused problems in the pro locker rooms one of the reasons he didn't hang around? IMHO, this is a smoke screen to 1) sell more tickets, and 2) have someone bigger on the roster to take pressure off Sunshine.
Click to expand...

It depends what locker room you are talking about. He certainly divided the Jets locker room. There is a reason Greg McElroy got a NFL start in 2012, and became their #2 quarterback after trading multiple picks for Tebow. Rex Ryan never wanted him, and noone but the owners and Tebow fans wanted him in New York. There are very few on the Jets who speak highly of him. But ultimately he was booted because he sucked. Hell Cutler caused just as much hell in the locker room but was called back from retirement to start at quarterback for a team he never played for


Bamabuzzard said:
Tebow's pride is what kept him from doing this from the get-go. It was obvious by how slow, deliberate, and fundamentally flawed his throwing was, that he was not going to be a successful NFL quarterback.
Click to expand...

it's in John Elway's book.......you know....the John Elway who said coming out of Stanford when he was going to get drafted, "I want to play for a contender."

I'll concur with the musings about the completely irrational fans who practically worshipped the dude, though. That was unlike anything I've ever seen with one exception...involving many of those same people.
Click to expand...

Everyone who worships the guy always points to the 2011 WC game as proof that he belongs and is being black balled by the NFL. But they all fail to accept 3 truths about that one particular game.

1) the Steelers had major injuries to an already bad defense. The Steelers were extremely thin at db and they couldn’t use Ryan Clark because his sickle cell issues prevented him to play at Denver because of the altitude. So the defense was basically Polamalu and Harrison due to injuries. But even then they shut Tebow down all but one play in the 2nd half. It was the 26th pass defense.

2) What happened the next week. Yes Tebow had a great 1st quarter but what about the other 3? It might have been the 2nd easiest playoff game that the Patriots had in the dynasty next to the 2018 Chargers game.

3) He was on an offense that was going to break the single season Touchdown passing record the next year, and one that was competing for 2 Super Bowls the next four years.

I think Tebowmania is the largest part of why people hate the guy. If you can’t see that the guy isn’t a good NFL player then I question what is a bad football player to those folks. I would say guys like Matt Flynn, Byron Leftwich, and AJ mccarron are infinitely better than Tebow and were shut out from full time starting roles way too soon in their career. None of those players had the toxic and rabid fan bases either. Most of the controversial aspects of Tebow come from his fan base and his pro Tebow media personalities that constantly push insane arguments and opinions. It really has nothing much to do with him being Christian or White. It’s the fandom that follows him.
Last edited: May 15, 2021
Reactions: TideEngineer08

I wonder if this is a way for the Jags to get attention by signing the Jacksonville hometown hero or if they think Tebow will be a real addition to the team.

What Gmac left out was how much crap it had within the coaching staff.

Type in “Greg McElroy and Tebow”. Something is wrong when you link it.
Reactions: OSUTideFan
T

Probius said:
I wonder if this is a way for the Jags to get attention by signing the Jacksonville hometown hero or if they think Tebow will be a real addition to the team.
Click to expand...

Welcome to the circus. Not a good idea by Urban.

They went 1-15 last year. He can’t make things much worse.
Reactions: crimsonaudio
B