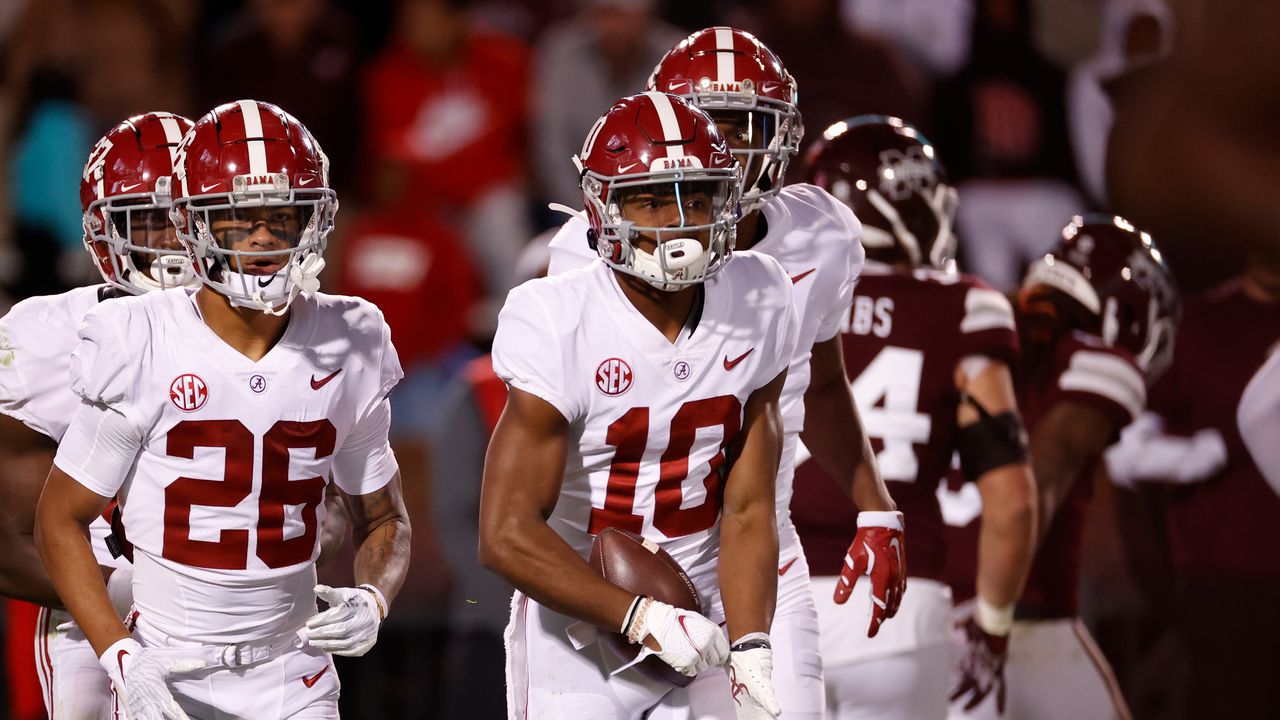 Nick Saban met with reporters after practice Wednesday in Tuscaloosa.

Hate to hear that was looking forward to him breaking out this year. Hope he can beat the time table back.

Seems we are off to our usual start.
Reactions: Rush

Argh. Hope he heals quickly and does damage this year. WR would seem to be a position of strength, but aside from Brooks it's a bit unproven.
R

Really hate that for him. Hope he heals quickly. Someone else is going to have to step up. Luckily we should have a lot of depth
T

Keep in mind it’s 6-8 weeks not whole season. Saban said most likely October 1st. That’s like 4-5 games. We have a lot of WR’s that will get reps which will be beneficial later in the season.
Reactions: The Ols, RollTide_HTTR, TideEngineer08 and 1 other person
J

Also, we have quality candidates to replace Jojo for time being, and looking at the schedule, now is the good time to figure out who's who for next 4 or 5 games. Good opportunity for Leary, Jones-Bell, HOlden, and any of freshmen to make moves now... and lock up the spots.
Reactions: CoolBreeze

Guys... fight club? The first rule about depth is? We don't talk about depth.
Reactions: The Ols, Con, Bazza and 1 other person
R

TideEngineer08 said:
Guys... fight club? The first rule about depth is? We don't talk about depth.
Click to expand...

I read another al.com article that said Earle has a Jones fracture. Got curious and looked that up.

It’s a fracture between the base and shaft of the 5th metatarsal — the bone running from the ankle joint to the little toe. From what I was able to glean from the medical article, its severity — and therefore recovery time — varies greatly.

Sometimes it’s a stress fracture (which can actually be more worrisome), and sometimes it’s the result of a specific event. There’s been no word from UA on how Earle’s injury happened.

Regarding the injury in general (i.e., not Earle’s patient-specific circumstances — which we don’t know), there are several points of good news and bad news.

Some good news is that, with Saban’s stated 6-8 weeks recovery time, it would appear that Earle’s injury is in the less severe range of the spectrum. Bad news is that there’s not a ton of blood supply in that part of the body, so exactly where on the bone the fracture occurred matters a lot.

What I read also said that a couple of the big things in recovery are (1) rest immediately after the injury, and (2) not rushing the return to normal activity, as that enhances the risk of re-injury. If that happens, you start all over at the beginning of the recovery process, and likely miss the whole year.

Bad news there is that the required rest is likely to cause Earle to lose conditioning. So even when the bone is healed, he might need some additional time to get back into football shape. Good news is that he starts out as an elite athlete in world-class physical condition, has some of the best best training staff in the country to work with him on rehab, and has the Andrews group in Birmingham to supervise said rehab.

As frustrating as it is for us as fans, it must be even more frustrating for Earle. He hasn’t played a truly effective down of football since the last year’s New Mexico State game, roughly 9 months ago.
Reactions: bama579, TIDE-HSV, UAH and 3 others

Trying to look on the positive side...I guess this gives one of the unknown youngsters an opportunity to step up and shine.
Reactions: Ledsteplin and RollTide_HTTR
E

Some guys are going to grow up very quickly…….. I think we will be good

it has to be done .
Reactions: AlBamaWagg, jthomas666, Perrett4Bama and 4 others

BamaMoon said:
Trying to look on the positive side.
Click to expand...

The positive side is the transfer portal. Alabama brought in three guys that were meaningful receiving targets. Without that I would be way more nervous right now.
Reactions: Con, TideEngineer08 and crimsonaudio

KrAzY3 said:
The positive side is the transfer portal. Alabama brought in three guys that were meaningful receiving targets. Without that I would be way more nervous right now.
Click to expand...

Exactly. We are about as deep as we’ve ever been with regards to potential. But Earle, Didn’t really have much experience either. And what we did see, showed promise, but also showed that he wasn’t ready for the big stage. I heard he was having a great off-season. But this is a deep group.
Reactions: KrAzY3, teamplayer and JustNeedMe81
J

I want to remind people that we have one of the best Treatment facilities in the program:

HOw many times we've seen recent players with UA that has come back from their injuries quicker before anticpated dates: Allen, Lewis, Tua, Hurts, and currently Mcellan, WIlliams (they're practcing with the team) ... Latu is working around the clock to be ready for Game 1... and he torn his meniscus last week.

BamaMoon said:
Trying to look on the positive side...I guess this gives one of the unknown youngsters an opportunity to step up and shine.
Click to expand...

There's Leary, Holden, and Jones-Bell with some experience. Freshman Aaron Anderson is out a few weeks with a knee issue. Then there's freshman Kendrick Law. He's really fast, and can line up at any position. Bond and the other freshmen don't seem quite ready yet. Who knows, maybe after fall camp, we'll see a surprise.
Reactions: Rush

KrAzY3 said:
The positive side is the transfer portal. Alabama brought in three guys that were meaningful receiving targets. Without that I would be way more nervous right now.
Click to expand...