Looking for sources of Football Education

(Career band kid here.) I've watched from the stands for years; I've cheered/jeered/etc. the whole nine. But I never played the game. I want to be a more educated fan and be able to discuss the game at a deeper level than "X tackled Y for {some yardage} and that was/wasn't exciting."

I'm looking for recommendations for books or whatnot to better understand the game. Something that will explain what, for example, zone blocking is or when a wheel route is most effective. I can google any of these topics individually of course, but that is far less structured and relies on knowing what questions to ask.

So, what do y'all recommend to correct my football ignorance?
Reactions: CraigD

Go to your nearest high school. Watch and listen. The JV squads is where you will learn the basics. Volunteer to help out and you get a much closer view. Talk to the coaches and tell them you want to learn and help.
Reactions: Tubafore and DogPatch

This guys does a great job with many subjects related to learning the game:

Football for Dummies, no offense meant toward you or anyone wanting to learn more about the game.
Reactions: CrimsonNeck, Tubafore, CraigD and 1 other person

I recommend both of these books to folks wanting a deeper understanding of the game:

The Art of Smart Football
Reactions: BamaNation, FaninLA, CoolBreeze and 2 others
B

I'm saying watch Nick Saban if you want to learn the game and how it should be played
Reactions: DogPatch

bamadwain said:
I'm saying watch Nick Saban if you want to learn the game and how it should be played
Click to expand...

That's what the OP has been doing "for years." He's asking for more depth than that.
Reactions: Toddrn, seebell and Tubafore

bamadwain said:
I'm saying watch Nick Saban if you want to learn the game and how it should be played
Click to expand...

I've watched Saban closely for 15 years and have learned basically nothing regarding assignments, route-trees, etc from that. The OP is asking for more.
Reactions: 92tide, Toddrn, seebell and 2 others

The fact you are an Alabama fan tells me you are already an intelligent and knowledgeable football observer.
Reactions: OSUTideFan, FaninLA and UAH
T

crimsonseal12 said:
Go to your nearest high school. Watch and listen. The JV squads is where you will learn the basics. Volunteer to help out and you get a much closer view. Talk to the coaches and tell them you want to learn and help.
Click to expand...

If only I had a reasonable excuse to be at a high school during practice time...just 9 more years until my oldest will be there.


alabama mike1 said:
Football for Dummies, no offense meant toward you or anyone wanting to learn more about the game.
Click to expand...

I used the term "ignorance" about me to open up the floor for more defamatory words Great suggestion!


crimsonaudio said:
I recommend both of these books to folks wanting a deeper understanding of the game:

These are perfect, thank you!
Reactions: crimsonaudio

Read the post on TideFans. We have some very knowable fans, some coaches who really know the game, then there is the rest of us.
Don't hesitate to ask questions, we have folks who know, and keep up with stats, like they were Birthdays for their wife or kids.

I'm afraid I'd be a pretty poor teacher. Been trying to explain basic concepts to my wife for the better part of a decade and I can't even get her to retain what "down and distance" means.

Football is a very intricate game, so I'm afraid you might have a long road ahead of you depending on how deep you want to dive in. There's a lot of rote memorization and pattern recognition involved.

Not going to lie it helps tremendously to have played. I consider myself lucky. Got to play in multiple offensive and defensive systems at the high school level. Sophomore year in HS we ran Marty Rozell's pass heavy West Coast offense. Junior and Senior years Hal Riddle came in and installed his Wing-T, a triple option offense with a lot of pre-snap motion and misdirection. Defensively, we ran a 50 my sophomore year and a 4-3 my junior and senior years.

This is a good compendium explaining the various concepts you'll encounter, but as you can see it's pretty extensive and even then doesn't come close to covering everything. Site doesn't cover a lot of the base offenses. Most fans here can tell you what the Wishbone offense is (a run heavy, option based scheme) seeing as Bama ran it extensively under the Bear, but it's not covered on that site, and I'll bet money when I said Wing-T above I might as well have been speaking a foreign language.

But it does a good job breaking down other things. "Was that running play an inside zone or a duo?" Even folks with a trained eye often mix them up. This site has articles that go in depth on both concepts.

For passing concepts, the name I'd first recommend looking up is Lavell Edwards. His fingerprints are all over that site I linked above. This is the man that codified pretty much every basic modern passing concept in a fairly simple package. With that as a baseline, you'll start to recognize intricacies in the passing game - beyond simply knowing "Devonta ran a post route" - that you may not recognize now.

"The Y (in most offensive systems this is the tight-end) ran a stick route and sat down when he found the hole in the defensive zone."

And so on and so forth. The site above breaks down each concept in depth. You'll eventually start recognizing route trees, the order of the QB's reads, how one of the receivers was running a route that was basically a decoy to get someone else open or how a receiver's route was dependent upon the coverage etc.
Reactions: FaninLA, Tubafore and B1GTide

A couple of foundational concepts:

Let's take a simple play I ran in high school and is still a staple of offenses today.

This is a 4 verticals concept: 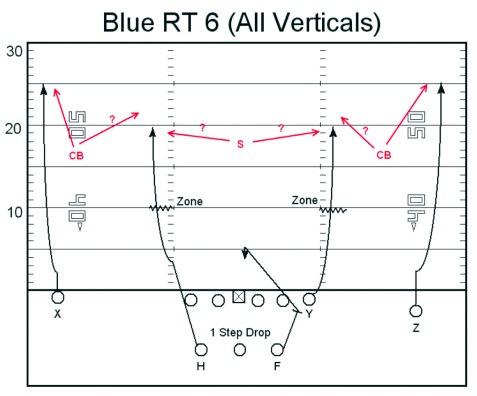 The playcalling scheme for passing we used under Riddle was fairly simple. In this instance, this play was simply known as "544."

That 544 tells you all you would need to know. Passing plays were 3 digit numbers as their most basic.

The 44 tells you the routes being run. The first digit is the outside receivers and the second is the inside receivers. On our route tree, the 4 was a basic fly route.

So a 544 boils down to "5 step drop, inside and outside receivers running fly routes." Simple, right?

Now what happens when the play call was "507?" On our route tree, a 0 was a hitch route while a 7 was a corner route.

Well now you get a basic smash concept, a foundational play against zone coverages.

Running plays were simple too. For instance, out most basic running play was "30 Trap."

The 3 tells you it was going to the FB (fullback was 3, tailback was 2, QB was 1 and wingback was 4), the 0 tells you which hole he was expected to hit (0 was the hole directly to the right of center) and the trap told you the blocking scheme. In this case, the play side of the line, center, left tackle and tight end would block down, blocking the first warm body they hit, while the backside guard would pull to his right to "TRAP" the nose tackle immediately to the right of the center, freeing up the runner for a gain.
Reactions: GboyBama, Tubafore, FaninLA and 1 other person
T

These are awesome! I'll have to review them several times. Thank you, AUDub

My goal is conversationally proficient, as is expected for all residents of Alabama regardless of team affiliation
Reactions: LSUgrad2BamaDad and AUDub

Being female, AND a band nerd, I've learned tons and tons just participating in the game forums here. I've asked questions of the guys here and they've never once talked down to me. AUDub's post above was helpful, too. I attend the local high school games here and enjoy them very much, and I watch every single play. I have to say the game forums here make the game much more enjoyable to me because I understand it more as a result.
Reactions: BamaNation

AUDub said:
I'm afraid I'd be a pretty poor teacher. Been trying to explain basic concepts to my wife for the better part of a decade and I can't even get her to retain what "down and distance" means...
Click to expand...

To be fair, you can't expect her to be that intelligent; she married a Barner, after all...
;-D
Reactions: crimsonaudio

uafan4life said:
To be fair, you can't expect her to be that intelligent; she married a Barner, after all...
;-D
Click to expand...

I imagine this is how I come off when watching football.

AUDub said:
I imagine this is how I come off when watching football.

When younger I would get so angry (internal) at fans who sat around me and had no clue about football strategy, etc. Why were they at the game? Later I realized it wasn't about the game for many...just about the party, etc.