What it takes to beat Bama...

uafan4life said:
Interesting. I had that one as 0-0 because there are no fumbles or interceptions listed in either team's official box score.

Did you remember the details of that turnover?
Click to expand...

Yup. Tre Mason fumbled at his own 32.
Landon Collins recovered it and we scored in like 4 plays.
Reactions: uafan4life

Go to the 58-minute mark

To see the fumble Matt is talking about...go to the 58-minute mark.

Burn the rest of the game.
Reactions: The Ols

selmaborntidefan said:
To see the fumble Matt is talking about...go to the 58-minute mark.

Burn the rest of the game.
Click to expand...

I don't ever want to see another second of that game.
Reactions: TopBamaBloke, JergusTide, Padreruf and 2 others

DzynKingRTR said:
I don't ever want to see another second of that game.
Click to expand...

I notice you didn't say, "I don't ever want to see even one second of that game."

How about a nice game of chess?
Reactions: BhamToTexas and The Ols

selmaborntidefan said:
I notice you didn't say, "I don't ever want to see even one second of that game."

Fortunately, THIS year's Bama is playing THIS year's Florida. I honestly don't think there's much to be gained for this year by putting previous years under the microscope, win or lose...
Reactions: bamagradinATL, Rolltide51, UAH and 1 other person

selmaborntidefan said:
2014 Ohio State - they were simply better than us
Click to expand...

DzynKingRTR said:
I don't ever want to see another second of that game.
Click to expand...

The Phantom Menace
Reactions: uafan4life, DzynKingRTR, TideEngineer08 and 2 others

So if it's either great QB play from our opponent or turnovers that beats us we can begin to speculate potential problem games. The only QB's or QB duo we face in the regular season this year that could cause us problems is perhaps Ole Miss with Corral and Plumlee and also since we're playing at Auburn we can't rule out Bo Nix getting a hot hand. A loss to any other team in the regular season will most likely be caused by turnovers. If we face Georgia in the SECCG it's only turnovers that can kill us. If we would face Oklahoma in the playoff then Spencer Rattler could beat us. In summation it's only Ole Miss , Auburn, and potentially Oklahoma that have QB's that can beat us so avoid turnovers and we should be fine in the rest.
Reactions: Ole Man Dan

selmaborntidefan said:
One of the things that irks me is that to make their case, the pundits always ONLY COUNT THE GAMES WE LOST! Never once will you ever see them look at the games we won and see if a QB was super talented or extraordinary or anything. Let's go through the losses real quick.

The rest were turnover-fests or emotional letdowns
Click to expand...

2012 TAMU - We had a chance to complete an incredible comeback at the end; alas, one of ours roughed their punter.

2015 Ole Miss - Does anyone else remember the blatant lineman downfield no-call that would have taken an Ole Miss TD off the board? That’s my abiding memory of that one.

So what we’re really saying is that to beat Alabama, you have to:

— Have a dual threat QB, who
— Plays out of his skull, and
— Win the turnover battle, and
— Dominate Alabama’s OL, thereby
— Stifle Alabama’s running game, and
— Pressure Alabama’s QB into some mistakes, and
— Not get untimely penalties, and
— Have the ball bounce your way a few times.
— Doesn’t hurt if the playcaller has a brain freeze.

Yeah, that pretty much works against anybody. Even the Patriots.

The true story is that to beat Alabama, you have to play virtually perfect football, and be the beneficiary of Alabama mistakes or good fortune from the football gods.

Something you will never see. A Bama tee shirt saying beat ______ (fill in the blank). We intend to do just that and don't require a reminder. 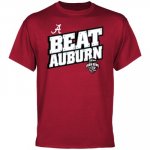 Reactions: The Ols, 92tide and TideEngineer08

Reactions: The Ols, Bazza, 92tide and 1 other person

What it takes to beat Alabama, is to have a great team, and Bama go crazy making stupid mistakes. Injuries to key players, lots of turnovers, lots of penalties, and maybe Judges missing calls on the other team.
It don't happen often, but it has been known to happen.
You must log in or register to reply here.
Share:
Facebook Twitter Reddit Pinterest Tumblr WhatsApp Email Link