Watching this will NEVER get old.

And this will always be my favorite video of that moment - hearing the crowd EXPLODE still give me chills!

MT CODY DAYS AWAY
62 days until Alabama Football: Terrence Cody
We are 62 days away from kickoff! Terrence Cody (62) was a nose tackle for Alabama from 2008-2009. Cody began his college career at Mississippi Gulf Coast Community College (JUCO) and absolutely flourished. During his two seasons at MGCCC amassed 79 tackles and six sacks, helping MGCCC to a NJCAA National Championship his sophomore year. For his efforts, he was named to the NJCAA All-American First Team and after slimming down from 410 lbs. to 385, he was a massive recruiting target for teams across the south. In the end, Cody would pick Nick Saban and the Tide in what would end up being a match made in heaven. Cody made an immediate impact for the Tide in 2008, amassing 24 total tackles and a forced fumble from his run stuffing role, showing that he was far and away the best nose tackle in the country. He would be named First Team All-SEC and a Unanimous All-American for the 2008 season but thankfully for Coach Saban and the Alabama faithful, Cody decided to come back for his senior year. "Mount Cody" was just as dominant in his senior season but one game in that 2009 season shaped his legacy more than any other. Alabama was up 12-10 with 4 seconds remaining as Tennessee lined up for a 44-yard game winning field goal. To the delight of the packed Bryant-Denny crowd on hand, Cody rushed through the line and blocked the kick (his second blocked kick of the game). Thanks to Cody, Bama would end up finishing the season as undefeated National Champions with Cody once again named a Unanimous All-American and First Team All-SEC. After graduating, Terrence Cody was drafted with the 57th overall pick by the Baltimore Ravens. Cody would go onto win a Super Bowl ring with the Ravens in 2012.

We are 61 days away from kickoff! Sam Gellerstedt (61) was a nose guard for Alabama in 1968. Gellerstedt is one of the biggest "what if?" stories in program history. During the one season he featured for the Tide, he was fantastic. Sam was fairly small, standing at 5'8" and 196 lbs but he made up for his lack of size with his incredible speed. Gellerstedt was so good that he was named First Team All-SEC and a First Team Football News All-American on what was an underwhelming Tide team in 1968. Sadly though, that was it for him at Alabama as he would not be seen on the roster the next season due to what was believed to be clashes with Coach Paul “Bear” Bryant’s style of coaching and culture, though we may never know for sure.
Click to expand...

Lol there is a DeVonta TD catch against LSU for just about every number north of 60 isn’t there?
Reactions: REDSEA, BhamToTexas, crimsonaudio and 2 others 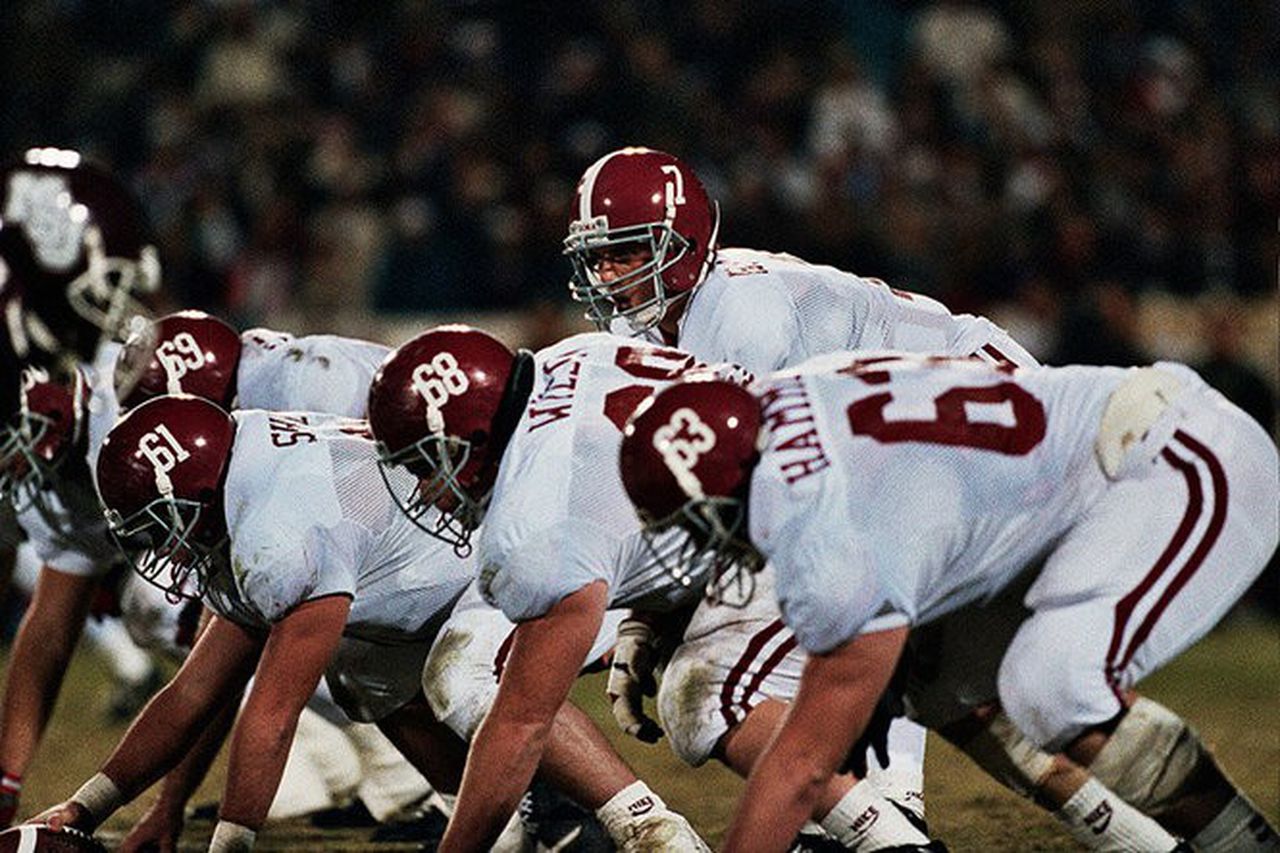 TideEngineer08 said:
Lol there is a DeVonta TD catch against LSU for just about every number north of 60 isn’t there?
Click to expand...

They must hate that guy, hahahaha
Reactions: BhamToTexas and TideEngineer08

Maybe the greatest LT to play at Alabama and we've certainly had plenty over the years. Chris Samuels: 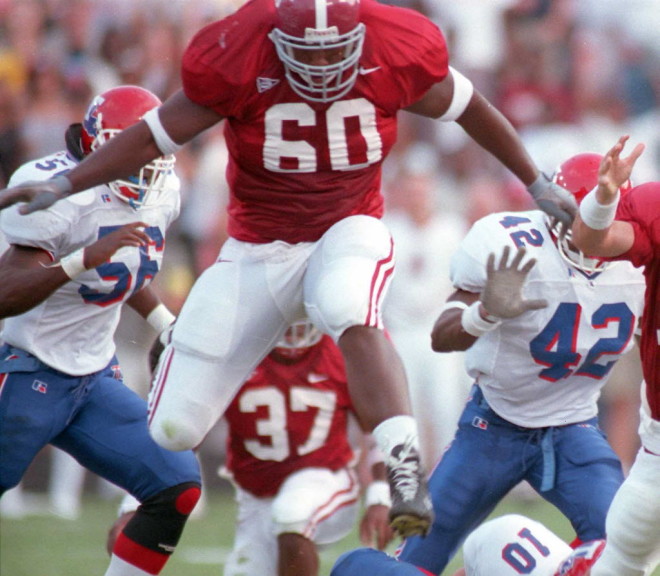 We are now 60 days away from kickoff! Chris Samuels (60) was an offensive lineman for Alabama from 1996-1999. Samuels was a very highly touted recruit and when he was put in at left tackle halfway through his freshman year, he did not disappoint. In fact, he would retain that spot for the rest of his career, playing a total of 42 games at left tackle. To say he was a great tackle would be an understatement. In those 42 games, Chris did not allow a single sack! Chris was consistently great, never taking a play off, but it all came together for the rest of the Alabama offense in 1999. Behind the Samuels led offensive line, RB Shaun Alexander rushed for 1,383 yards collecting many accolades along the way including being named SEC Player of the Year. Samuels would be rewarded for his play as well in 1999. He was named First Team All-SEC and a Unanimous All-American. He was also awarded the Outland Trophy (best interior lineman in the country). Team success also came with these accolades as Alabama secured their first SEC Championship since 1992 after beating Florida 34-7 in the 1999 SEC Championship Game. After graduating, Samuels was drafted with the 3rd overall pick in the NFL Draft by the Washington Redskins (now Washington Commanders). To nobodies' surprise, Samuels was a monster on Washington. He would be named to six Pro-Bowls in his 10-year NFL career and after retiring was inducted into the Washington Commanders Ring of Fame. Chris Samuels was one of the greatest in Alabama's illustrious history at offensive line.
Click to expand... 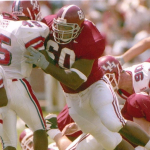 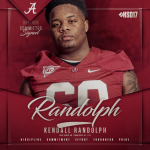 That is so cool. DeVonta had a son old enough to play college ball the same time Devonta did.
Reactions: crimsonaudio

No bulldogs were actually harmed in the making of this video.
Reactions: seebell

2017 regular season was a blur I just remember this game being scary.
Reactions: TideEngineer08

One thing I LOVED about those Alabama teams was Ardarius Stewart delivering downfield blocks, even when he was not the receiver. LOVED the team work of those guys. Man, great teamwork.
Reactions: TideEngineer08, Con, crimsonaudio and 1 other person

DzynKingRTR said:
This might be my favorite moment of the Saban era. Have we ever had a transfer player this loved by his team, fans, and coaches?
Click to expand...

One of my favorite players from the Shula era, who also led the transition to the Saban era. Antoine Caldwell. 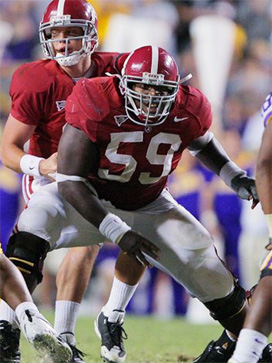 crimsonaudio said:
They must hate that guy, hahahaha
Click to expand...

We are 59 days away from kickoff! Sylvester Croom (59) played for Alabama from 1972-1974. Croom played many positions out of high school including tight end and linebacker but in the end, he settled in at center for Coach Bryant's newly integrated Tide team. He quickly distinguished himself as not only a great player, but a great leader as well. Croom would help the Crimson Tide win the SEC Championship every year he was on the varsity roster, also winning the National Championship in 1973 as well. His senior year in 1974, Croom was named a captain and would be named a Kodak All-American after the season concluded. After graduating, Croom turned to coaching, joining the Alabama staff as a Graduate Assistant. Croom would remain on the Tide staff for the next 10 years with stints coaching both the ILBs and OLBs before leaving to be the RB coach for the Tampa Bay Buccaneers. Croom spent time as both a position coach and offensive coordinator in the NFL from 1987-2003. In 2004, he was hired to be Mississippi State's head coach. This was a historic moment as Croom was the first ever African-American coach to take the reins of an SEC team. In 2007, Coach Croom's Mississippi State Bulldogs went 8-5 and won the Liberty Bowl with Croom being awarded SEC Coach of the Year for his efforts.
Click to expand...

High School and Personal Data
Lengthy and explosive defensive tackle who stayed in-state with his commitment to the Tide … a four-star recruit and the No. 25 defensive tackle nationally according to ESPN.com … rated as the No. 29 prospect at his position and 15th-ranked player in Alabama by 247Sports … the No. 34 defensive tackle and No. 18 player in the state on the 247Composite … selected to the 2020 Alabama MaxPreps All-State team as a defensive lineman … also earned PrepStar All-Southeast Region honors in his final season at Lee … named to the Alabama-Mississippi All-Star Classic roster as a senior … coached by Eric Hudson at Robert E. Lee High School in Montgomery … finished with 82 tackles across his final two seasons at Lee, including 11 for loss and six sacks … a two-way player who also started along the offensive line where he recorded 14 pancake blocks as a senior in 2020 … helped the Generals to an 8-5 record and an Alabama 7A state semifinal appearance in 2018 … chose Alabama over Auburn, Florida, Georgia, Ole Miss and Tennessee.
Reactions: Con
You must log in or register to reply here.
Share:
Facebook Twitter Reddit Pinterest Tumblr WhatsApp Email Link