I'm surprised no one has posted this! Happy Birthday Coach 86yrs young 2day, brought Alabama football back and would of stayed longer if was not for some administrators
Reactions: Bama-94-00, OSUTideFan, TideEngineer08 and 9 others

Happy birthday to Coach Stallings! I saw it on Facebook. Today is also Tua’s 23rd birthday.

Stallings also put in a good word with Saban about Bama............
Reactions: TideEngineer08, Con and dtgreg

Great coach, and even greater human. One of my heroes. Best wishes, Coach.
Reactions: CrimsonPaul, TideEngineer08, UAH and 2 others

I"ve shared this before but it's been a while...

We got to chat with him when we lived in NYC. He was speaking at a boys foster home fundraiser on east end of Long Island that we supported and we took a 2hr train ride out there to hear him speak. This was the year after his book (Another Season) was released and I wanted to try and get it signed. There were about 1000+ people in the conference hotel ballroom. He got up to speak and about 2 minutes later they started serving everyone while banging on dishes, talking etc. As you can imagine he didn't appreciate that very much (and neither did I).

He stopped, leaned over the lectern, and yelled in his gravelly voice, "WHOAAAAAA ... WAAAAAAAAAITTTTTTT A MINUTE ... I DON'T KNOW HOW YOU YANKEES DO THINGS BUT DOWN SOUTH WE DON'T TREAT THE SPEAKER LIKE THIS. I GOT ON A PLANE AT 5AM TODAY AND HAVE BEEN THROUGH THREE AIRPORTS JUST TO GET HERE TO SPEAK TO YOU PEOPLE." It.was.awesome.

Afterward, we went up to him and told him we were from Alabama, Bama alums, and missed him being our coach. He stood up and gave me a big bear hug and said "Sure is good to see some good home folks up here!"

I reminded him of an intramural football game he came to that I had invited him to (on a dare) during the 1992 season .... that he attended (!!!) ... and he remembered going and some of the details of that game.

He is a great human being who was done very wrong by an absolutely idiotic UA president and and even bigger idiot AD. Our walk in the wilderness before Coach Saban was a direct result of their idiocy. Thankfully, we're in a different place now.
Reactions: 4Bama, gtowntide, CrimsonPaul and 9 others

i was lucky enough to meet him briefly at my old roommate's wedding in the spring right after the 92 season. my roommate was from missouri and had a brother with downs syndrome and his parents had been put in touch with coach stallings on one of their visits and they ended up keeping in touch with the stallings and getting to know them and john mark.

he was a super nice man to meet and was larger than life.
Last edited: Mar 3, 2021
Reactions: gtowntide, BamaNation, Con and 3 others

My father kept a copy of this photo on his dresser. It reminded him of what is important in this life.

Another Season is a must read for all Alabama fans, young and old, and people in general. When John Mark passed away, it was like a family friend dying.

Happy belated birthday, Coach Stallings. I'm thankful I got to cut my teeth as an Alabama fan under your leadership.
Reactions: Elefantman, 92tide, BamaNation and 1 other person

My parents know the Stallings, had him sign this for me years ago for my birthday. Cherished gift! 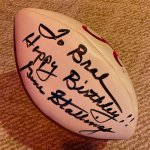