Why did the cantaloupe jump into the pool?
It wanted to become a watermelon
Reactions: Bazza

Reactions: The Ols, UAllday, crimsonaudio and 3 others

Reactions: fireater, Bamaro, crimsonaudio and 3 others

Reactions: B1GTide, The Ols, seebell and 1 other person

Can’t believe what I saw in McDonald’s today. An old man placed an order for one hamburger , French fries and a drink.
He unwrapped the plain hamburger and carefully cut it in half , placing one half in front of his wife.
He then carefully counted out the French fries , dividing them into two piles and neatly placed one pile in front of his wife.
He took a sip of the drink , his wife took a sip and then set the cup down between them. As he began to eat his few bites of hamburger , the people around them were looking over and whispering.
Obviously they were thinking , 'That poor old couple - all they can afford is one meal for the two of them.'
As the man began to eat his fries a young man came to the table and politely offered to buy another meal for the old couple. The old man said , they were just fine - they were used to sharing everything..
People closer to the table noticed the little old lady hadn't eaten a bite. She sat there watching her husband eat and occasionally taking turns sipping the drink.
Again , the young man came over and begged them to let him buy another meal for them. This time the old woman said 'No , thank you , we are used to sharing everything.'
Finally , as the old man finished and was wiping his face neatly with the napkin , the young man again came over to the little old lady who had yet to eat a single bite of food and asked 'What is it you are waiting for?'
She answered.....'THE TEETH'!
Reactions: B1GTide, gtowntide, The Ols and 4 others

A 90 year old man on a moped pulled up to a red light and glanced over at the sleek, shiny car next to him.
He nodded to the driver, who was a doctor, and said, "Nice car sonny. What kind is it?" The doctor replied, It's a Ferrari GTO and costs half a million dollars."
The old man shook his head and said, "That is a lot of money, but why does it cost so much?" The doctor, "Well, for one thing, it can do 220 miles per hour."
The old man was amazed and asked if he could look inside. The doctor says, "Of course." Leaning over, he sticks his head in the car and marvels at it. "That's really nice", he complimented the doctor, and smiling said. "I think I'll stick with my moped."
The light changed and the doctor thought he'd show the old guy the power of the engine, so he stomped the gas and took off in a flash. At 150 mph he glances in his rear view mirror and sees a dot and it seems to be gaining on him. Soon, WHOOSH!, a blur whizzes by! Puzzled, he wonders what could be faster than his Ferrari.
Pressing the gas, he speeds up to 180 and much to his surprise he sees the old man on the moped rocketing along. Not to be outdone and a matter of pride, he smirks, "I'll show him. " and he passed the moped, soon the speedometer reaches 200 and he looks in the mirror and the old guy is gaining on him AGAIN!!!
Astounded, he tops it out at 220 and thinks "That takes care of that." Not 10 seconds later, he cannot believe his eyes, here comes the old dude on that stupid moped!!
Suddenly, the moped slams into the back of the Ferrari and demolishes the rear end. The doctor stops the car, jumps out and shocked, finds the old man, in the mangled mess is still alive!
He runs to him, saying, "I'm a doctor. Is there anything I can do?" The old man lifts his head and says, in a tiny whisper, "Could you unhook my suspenders from your side mirror?"
Reactions: fireater, B1GTide, OakMtn4Bama and 3 others

I'm even good waiting until Wed... 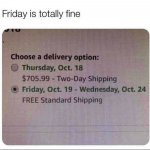 Reactions: B1GTide, DzynKingRTR and The Ols

Reactions: The Ols, Bazza and B1GTide